Friends and Foundation of the San Francisco Public Library (Friends) is a diverse community of individual and individuals, families and institutions who love our San Francisco Public Library and work to make it exceptional. We champion free public access to information, resources and opportunities for all people.  We envision the future of our libraries as robust centers of 21st Century literacy, economic opportunity, life-long learning, discovery and community life.

Our mission is to strengthen, support and advocate for a premier public library system in San Francisco.

We are the Library’s

We pursue our mission in two ways. First, we raise philanthropic support in the private sector and earned revenue from the resale of used books through our Community Book Program. Funds raised from both sources are dedicated to direct annual support the SFPL to enhance programming, collections and material needs and to sustain Friends’ operations, advocacy, book, and volunteer programs. Second, we educate the community and advocate to ensure that San Francisco maintains a local commitment to adequate and sustainable public funding for its Libraries through the Library Preservation Fund, the source of 98% of the SFPL’s budget. Our history is grounded in successful efforts to rejuvenate a poorly funded and struggling system into the premier urban Library we enjoy today. 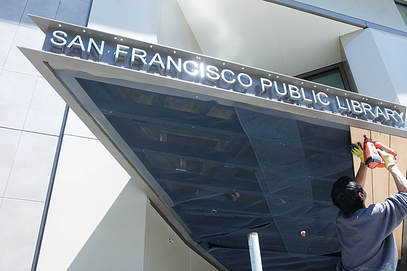 Friends of the San Francisco Public Library was founded in 1961 by Marjorie Stern, Mary Louise Stong, Hilde Kolb and Grace Macduff Parker. For the first few years, volunteers performed every task, including organizing book sales, processing membership contributions, staging special exhibits and sponsoring citywide poetry contests. By the 1980s, Friends began to play a more active role as an advocacy organization for the Library. Those efforts first culminated in 1988, when Friends helped San Francisco realize the City’s  long time goal of a new Main Library through a campaign for Proposition A, a $109.5 million bond widely supported by City voters. Further, Friends also helped pay for the cost of furniture, fixtures and equipment not covered in the bond. With these successes, and an extraordinary outpouring of more than 17,000 donations from residents and organizations throughout the City and beyond, the vision of a new Main Library became a reality when the new Main opened its doors on April 18, 1996.

The Library Preservation Fund is critical to the current and long-term health of our premier urban public library. It has enabled the increase of operating hours by 53%, the expansion of the budget for books and materials by almost 400%. and has made the San Francisco Public Library one of the only systems in California with every branch (28 of them) open seven days per week.

Friends also led the successful advocacy effort in 2000 for 74% voter-approval of a $106 million bond to build and refurbish 24 of the neighborhood branch libraries citywide. Similar with the Main’s rebuild before it, Friends raised $16 million for furniture, fixtures and equipment. The Neighborhood Library Campaign's fundraising success helped to fulfill the citywide dire need to revitalize San Francisco’s neighborhood branch libraries and equip them for the 21st century.